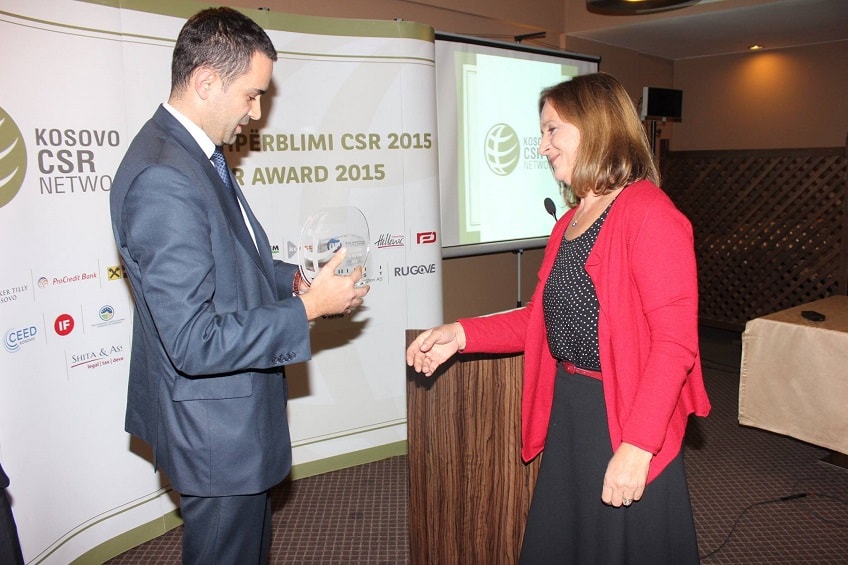 The Rugove Corporate Campaign, dedicated to people affected by Down syndrome in Kosovo, won the first prize at the CSR Rewarding Ceremony in Kosovo for 2015.

In this solemn ceremony organized by the Corporate Social Responsibility Network in Kosovo (CSR), were presented and rewarded social responsibility projects with the most sustainable impact in society.

With these projects, fourteen companies have applied, which consistently exercise social responsibility in the community they operate. Rewarding CSR is organized annually by the CSR Network to evaluate enterprises that contribute to the CSR segment, thus to all those business entities that, by their activity, contribute to improving the social and economic well-being of society.

The Rugove Corporation on 2014 in cooperation with Down Syndrome Kosova and Marketing Company Republika has launched a campaign dedicated to people affected by Down syndrome in Kosovo.

The purpose of this campaign was to provide funds for the Down Syndrome Association in Kosovo, as well as to raise awareness among citizens about this society.

This campaign was strongly supported by Kosovar artists, who without hesitation have helped to realize this project.