Established in late 2006 in the beautiful Rugove region of Kosovo, Rugove is a private company which started out as a partnership between Unior DD and a local partner in Kosovo. During 2009, Unior DD decided to sell its Rugove actions and return to Slovenia, which opened up the opportunity to established a completely local partnership. Today, Rugove is owned equally by two local partners and with no other stakeholders to the company.

Initially, Rugove only offered bottled water in plastic bottles of 0.5l and 1.5l. After hefty investments to its factories, human resources and distribution network, and following the experience gathered by its sales teams, today Rugove has a broad product line including bottled water in glass bottles of 0.75l and 0.25l, big 6l plastic bottles, 10l plastic barrels and a selection of cheeses for the cheese market. Rugove’s revenues have increased six fold from the first year it launched its first products. Without a doubt, the extension of Rugove’s product line is backed by a continuous reinforcement and development of the company’s business management side, which is evident due to the company’s efficient functioning, fast response to consumer needs and a successful expansion in other markets.

In 2009, Rugove established its cheese producing plant near the water bottling plant in Drelaj, a decision that was influenced by the high popularity and consumption of white cheese in Kosovo. Moreover, given that most of the white cheese available in the Kosovar market is imported from outside, the new local plant is faced by a very bright future and a solid potential for growth. After standardizing production and overcoming initiall challenges, the Rugove cheese, made of fresh milk gathered in the mountains of Rugove, has been accepted very well by the consumers, a fact proven by our steady growth rates.

Today, the Rugove company is one of the rare local producers offering entirely natural products, produced right here in Kosovo. As the only Kosovar company that offers water bottled right at the source, cheese that is produced from the fresh milk of Rugove cows and that has international certifications ensuring a high quality of products and business management, Rugove is one step ahead of the market, and in sync with global standards.

Rugove’s mission is to make its brand become the synonym of health, quality and good living. We strive to maintain the highest quality and service of all our products, making sure that everything we produce is delivered not only in Kosovo but also on the regional scale.

Rugove’s vision is to bring the nature found in Rugove’s mountains into households both in Kosovo’s market and abroad through natural and healthy products of high quality, processed right at the heart of the Rugove region in Kosovo.

Rugove Corporation is a member of the Corporate Social Responsibility Network in Kosovo (CSR Network Kosova), where Rugove CEO Visar Kelmendi is part of the board.

Rugove Corporation is honored with the FIDES Award for Philanthropy

Rugove Corporation at the award ceremony FIDES 2015 for Philanthropy in Kosovo was awarded for its contribution through the “1 Like 10 Cent” campaign. This campaign dedicated to persons affected by Down syndrome in Kosovo, Rugove started in cooperation with Down Syndrome Kosovo Association. www.facebook.com/dskosova and the marketing company Republika www.facebook.com/RepublikaCommunications. The purpose of this campaign was to provide funds for the Down Syndrome Association in Kosovo as well as to raise awareness among citizens about this society. The greatest achievement of this campaign was the realization of these two objectives.

Rugove Corporation is grateful to all citizens who have liked and shared Rugove Corporation’s Facebook page, which have played an essential role as a true partner throughout the campaign. Rugove is also grateful to the artists like Eliza Hoxha, Adrian Morina and Armend Ismajli, who voluntarily, without hesitation at all, helped to carry out the campaign by helping people affected by Down syndrome to realize the label of one million bottles as well in raising awareness among citizens through a photo session.

FIDES Award symbolizes public gratitude for companies and individuals from Kosovo and diasporas who systematically and sensibly to the environment, culture and traditional values have supported activities and projects of common interest. Earlier this campaign was also awarded with the first prize in CSR. 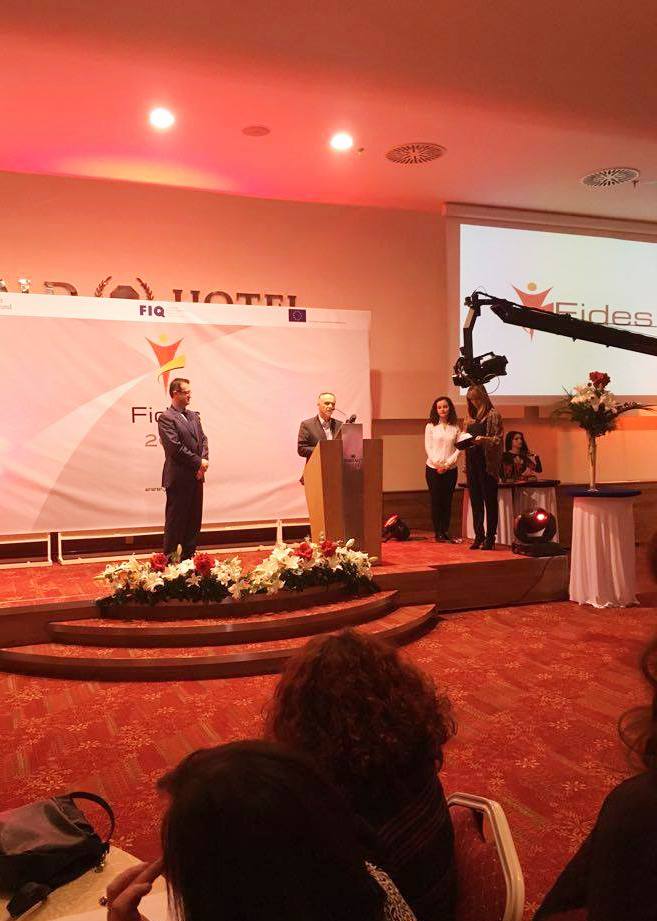 Rugove is certified with the ISO 22000 certificate by 2015, a certificate that includes HACCP certification, thus guaranteeing high quality and standardized both in company products and in its business management.

On 2014, Rugove Water was published in the book Fine Waters by Michael Mascha among the world’s most famous waters. http://finewaters.com/